I like to keep active on holiday. In fact it’s really important to me (read this for tips on how), especially with my first marathon coming up in May.On Sunday 21st Feb, I ran my third half marathon: the Cape Peninsula Half Marathon in Cape Town.

In the lead up to the race, I had had some concerns about my lack of training beforehand. This is because I hadn’t done very much running over the winter months in Guernsey and when I did run I was starting to get shin splints, so in short, I had been avoiding running for a while. Attached to that, I was also pretty concerned about running in warmer temperatures coming out of the British winter. But as it turned out, I had been in the sunshine for a few weeks by that point and I ended up feeling pretty good. Yes, I was a little tired but the route was amazing and really uplifted me when I was starting to lag. 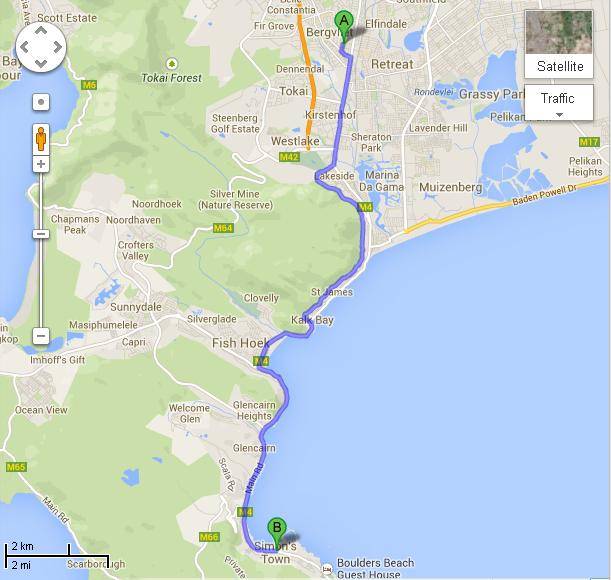 The Route
The race started at the Ladies Mile in Bergvliet and ended in Simon’s Town. I really enjoyed running all the way along the coast through Kalk Bay, Fish Hoek, Glencairn and so on. The views were amazing. We ran most of the race with the sea on our left as you see from the route map above. The course was pretty flat with slight inclines, which when tired felt steeper than what they were – especially at the end! The Cape Peninsula is actually Africa’s fastest marathon due to its flat route.
Race Notes

I found the race to be pretty well organised. I arrived pretty early at the start of the race with my boyfriend’s dad who was also doing the half. There were A LOT of people there and we almost lost each other once I had found my way back from the ridiculously long line for the bathroom. But once the race got started, we were fine. I actually lost him pretty early on and then just ran the majority of the race alone. It was great to just be in my own head and take in the views and think about what completing a full marathon in just a few weeks’ time would be like. It got a bit hectic when I arrived at the end. there were a lot of people leaving as I came in – both runners and spectators. I ended up missing the 20km marker, so passed the 19km and then just ran the last couple of kms blind begging to see a finish line, which made me really grateful for the end.

In the end, my official time was 2h 33mins 05secs. I’m really pretty happy with that. It’s not a PB, kind of slow actually, but the fact that I am mentally and physically able to run 21.1km on very little training makes me feel positive for the marathon in May. So now to focus on a 30-35km training run for my next challenge and, of course, the 42.2km on 8th May in Prague.

Did you run this year’s Cape Peninsula Half Marathon? Or wish you had? Let me know below!

(P.S. I wish I could tell you where I got these images from but I grabbed them from Google for non-publishable purposes – aka personal conv on whatsapp – and then couldn’t find them again to credit. If you own them, please let me know! Thanks!)