I honestly still cannot believe that I ran a whole marathon. I genuinely never thought that I had it in me. It was never really anything that I had long-aspired to do, like writing a book or owning my own company and if I’m honest, it’s not something that I particularly plan to do again. Not because I didn’t enjoy it. I did and I enjoy running and will continue to do so, but it didn’t change my life so it’s done. Tick. Move on. 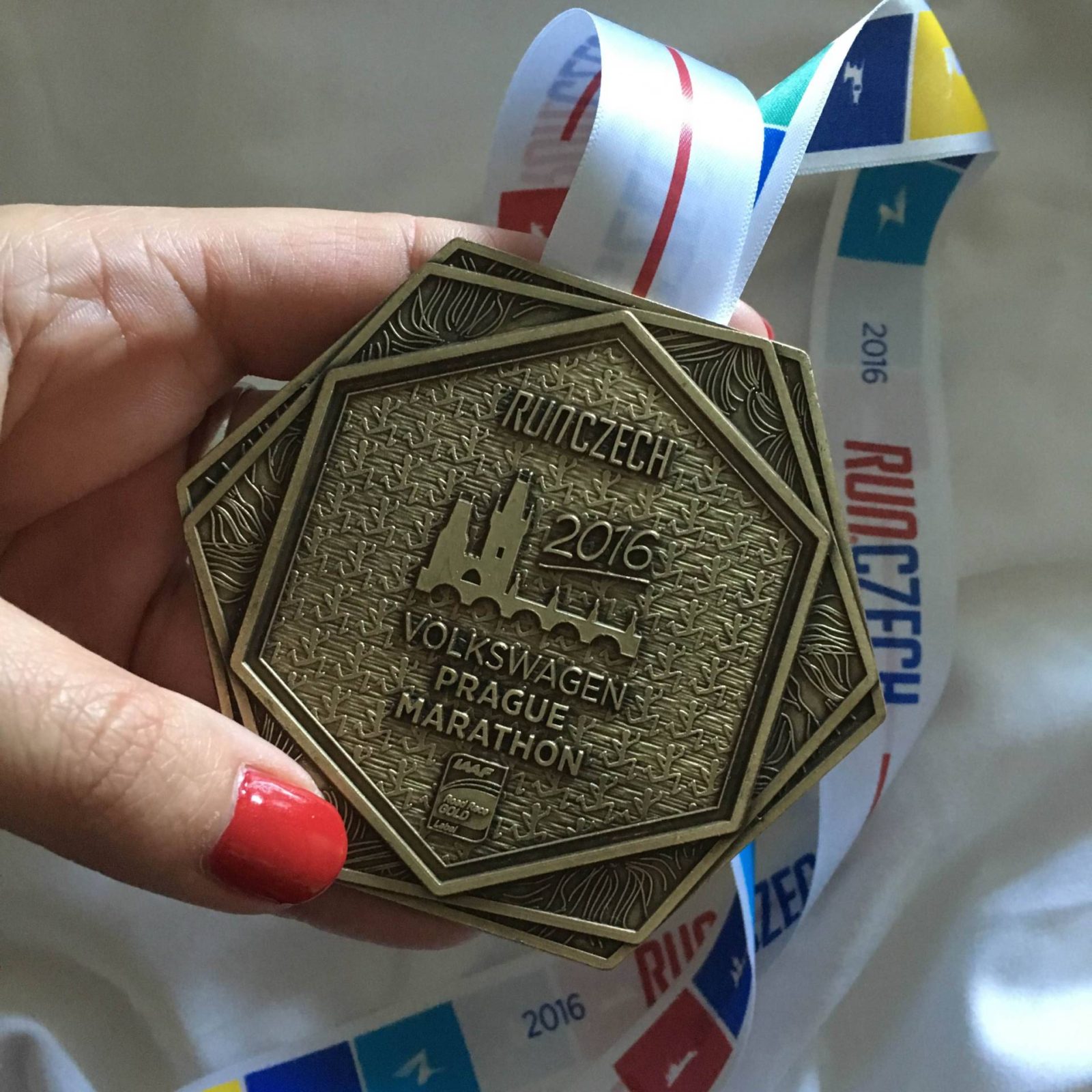 In the lead up to the marathon, I had all of the usual niggles and other runner things that made life a little bit more difficult at the time, but in the end taught me that I am not invincible and that a marathon is a pretty big deal to put your body through. Lesson learned: Do NOT take it lightly.
Thank yous go to my physio for teaching me how to get stronger when I had shin splints, my sports therapist for rubbing where it hurt (yes, I just wrote that and yes, she was a girl) and my boyfriend, Rob, for pretty much everything else. He trained with me, he woke up early with me, he ran with me, he dealt with me when I cried out of frustration… he even stopped making fun of me when I did yoga in the middle of the living room floor. (He used to come over and try and knock me over or tickle me so this was a BIG DEAL, folks.) I have a whole other post for you all in the pipeline on Yoga for Runners by the way so stay tuned – it’s epic and it changed my running life.
So anyway, shin splints and downward dogs aside, we made it to marathon weekend. I felt strong and able and I just had to get there. That involved two flights: one from Guernsey to London (#islandlife) and one from London to Prague. We booked an early Friday morning flight from Gatwick meaning we had to get to the airport the night before, which in truth probably changed my life more than completing a marathon did. Being at an airport on the day you fly is so stress-free – I’m definitely doing it more often. We stayed at BLOC Gatwick and again, there’s a whole other post coming on that too because it’s a great place to stay and plane-spot, even if you aren’t a big plane-spotter. We flew with our running kit in our hand luggage (The airlines could have lost anything but that and I would have been fine).
We flew Easyjet which was a relatively painless experience except for the stags sitting next to me & their ongoing lad talk:
‘And, was she a whopper?‘
‘Yeah, like a size 12-14 but I was drunk‘.
Funny that, guys, cos this size 12-14 ‘whopper’ sitting next to you is literally running a marathon around you on Sunday whilst you sleep off your hangovers and poor decisions from the night before… I thought it. I didn’t say it.
Upon arrival in Prague, we jumped in a cab which cost around 600 koruna and took about 20minutes to get us to town and the hotel. We stayed at the InterContinental Prague. That afternoon we went for a quick run to loosen up the legs and used it to get to the expo to pick up our race numbers and have a look around. We got a cab back, showered and headed to meet Rob’s dad who had arrived that afternoon. On Saturday, we spent a little time exploring, tasting food, shopping and enjoying the sun – everything in moderation before the big day. Saturday night was a plate of pasta and an early night. Rock and roll but that is what marathon travel is about. 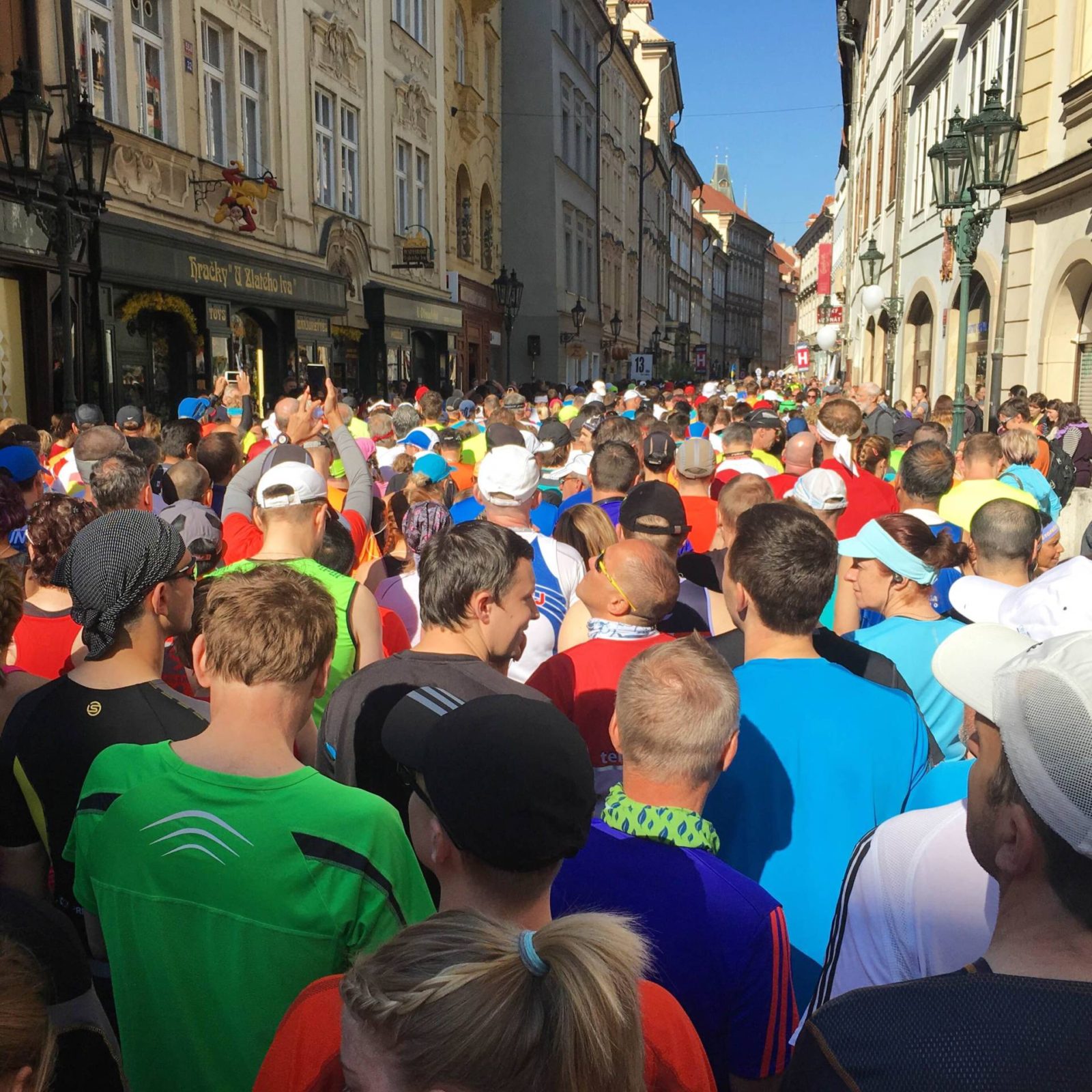 On the day of the marathon, I was relatively calm. I knew that I needed to just focus on running and that was it, which allowed me to just get up and go. We ordered room service toast & banana. I had packed my peanut butter from home. OTT? Maybe, but why change what works? We got ready and walked down to the start. We then spent a little too long trying to find the bag drop, which was a long way the other way and we realised that leaving it at the hotel would have been easier. The race started quite calmly. Despite the initial crowd rush, I didn’t want to run until we were over the start line, which took about 10 minutes from where we were.
The first 10km felt good. We went pretty slowly & we enjoyed crowd and the experience. I had no feelings of injury or shin niggles which was amazing. During the second 10km, the day’s heat was building. We started at 9am so knew that we would be in the midday sun at some point. That day it reached 25 degrees. But the crowd was still good and we were enjoying the route through the various areas of the city and along the river which was very picturesque. Reaching the half marathon point felt good. We hit it exactly with 5-hour pacer at 2h30 almost exactly. I was happy with that and had a lot more left in the tank. 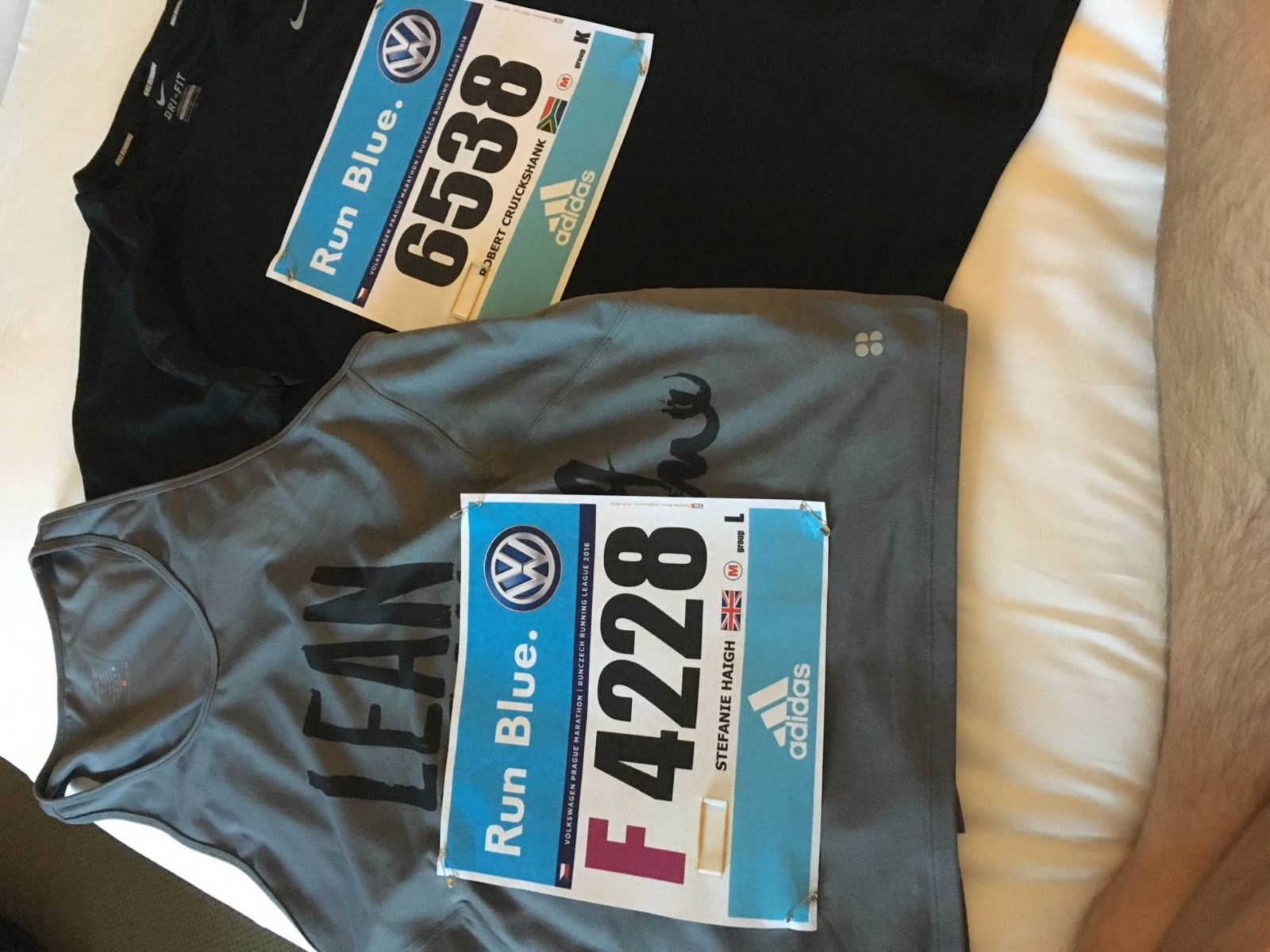 By the time we reached 30km, I was starting to flag. My legs were feeling tight, but a little sugar and some happiness from the crowd kept us going. The 30km mark had been my main goal so I was happy to get to it and knew that I would be able to finish this thing. Only 12.2km to go. I’d run 12km a million times before. That would be fine, right?
Well, the thing is that once you know you’re going to be able to finish, you back off a bit. You relax a little. There are lots of people walking around you. Lots of the volunteers had given up and people were walking back & packing up. Water stations were a little hazardous to say the least. We saw a women fall over on the cobbles and never saw her again. Rob was convinced she broke her arm. I hadn’t seen anything like that but it made me slow down and focus on my footing.
When we finally reached 40km, my breathing was shallow and I was emotional. In fact, I had to stop running to order to burst into tears as my breathing couldn’t handle running and crying at the same time! After a short outburst, I recovered quickly and went into the last 2.2km.We ran pretty steadily but slow. I was so happy to see the 41km marker and even more so to see the ‘900m to go’ sign. After that, the crowd died down and I was just focused on the big inflatable tunnel at the end of the road. After  I passed the 300m mark, I looked at Rob and said ‘I have to go‘ and I sprinted over the finish line cos I just wanted it over. Then I burst into tears again. My official time was 5h 25mins.
That afternoon we hobbled back the hotel, drank the obligatory celebratory bubbles, re-consumed all of the calories that we had burned off, relaxed in bed and then went out for dinner in the evening to a place called Krcma. Read my list of 5 Places to Eat in Prague here. On Monday, after a very nice massage at the InterContinental spa, we explored the town & more food places, took in the views on a boat trip (no walking necessary!) and did a little more shopping before treating ourselves to another slap-up meal and heading to bed. We flew back on Tuesday morning content with a very productive weekend.

The Pros & Cons of the Volkswagen Prague Marathon 2016

Pros
Cons
Have you ever run a marathon? Where was it?
Total
0
Shares
Share 0
Tweet 0
Pin it 0