Total
0
Shares
0
0
0
So apparently Helsinki is major European air transit hub. I wasn’t aware until recently. As many of you may know, I have recently become obsessed with airmiles, airline status and points and luxury travel (ok, the latter isn’t a recent thing, but I have recently realised how within reach it can be when you get clever with airmiles.)

I learnt most of this from Rob, my boyfriend for new readers, who spends the majority of his spare time in airline and travel points forums. After a touch of research, Rob randomly found a great deal on Qatar Airways flights from Helsinki to Bangkok via Doha in business class last year, so he randomly booked it. The whole premise behind the flights were that we would have higher airline status and perks with BA if we did this trip. And of course, a long awaited Thai beach escape. I was sold. 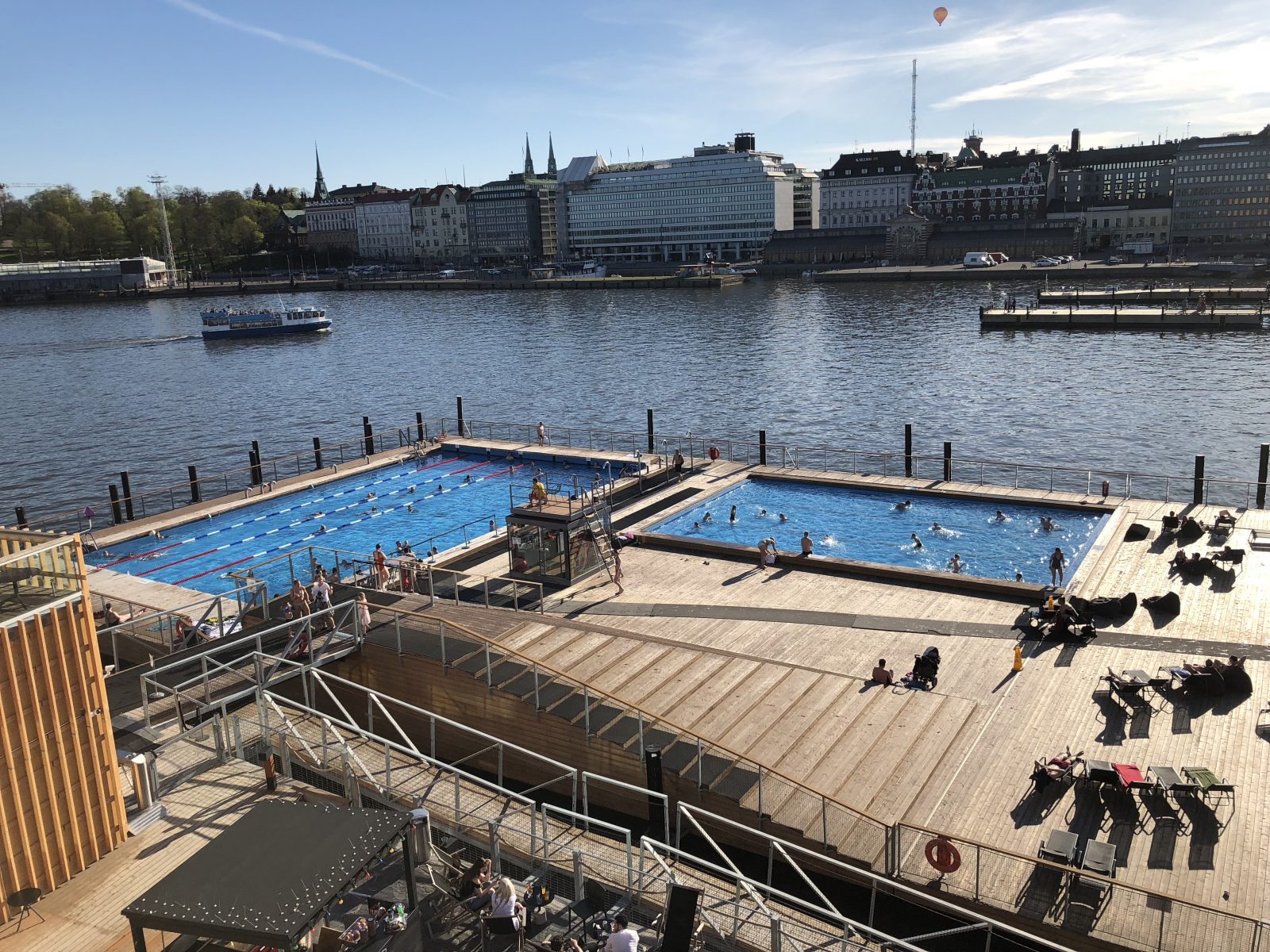 However we do live on Guernsey and we often experience travel delays so we made sure that we arrived in Helsinki ahead of time. So we went left 24hrs earlier. That left us with 24hrs to explore a city that we had never been to nor thought of visiting before.
We arrived at Helsinki airport at around 3pm local time, trekked to pick up our bags (it’s a huge airport) and then headed outside to find a cab. I had previously been made aware of the app, Whim, kind of like a mix of Citymapper & Uber, and was eager to try it out. I ordered a taxi and paid for it and waited. It didn’t come. The app went a bit haywire and we ended up calling the taxi office who suggested we just get in line for a taxi at arrivals. I managed to find how to complain on the app and they immediately apologised and refunded us. We will live to try it another day.
Our hotel was 25minutes from the airport by car. We were staying at Hotel Katajanokka, a converted prison now boutique hotel on the Katajanokka island just to the east of central Helsinki. I booked it because it was different. And it certainly was. We were greeted by a very friendly receptionist who checked us in very quickly and directed us to our room. We were in room 251. It’s crazy how they have kept the essence of the prison. The corridors are just like cell blocks  and the doors are thick and metal.
Our room appeared to be 3 cells converted to one room with a large ensuite bathroom. The colours were kind of grey which added to the prison feel. All of the windows seemed to be authentic. You don’t have a view but you feel grateful for light. The room feels safe and cosy. Obviously full of home comforts – a great bed, large bathtub and a very lovely mini bar. Pretty sure that wasn’t there before. 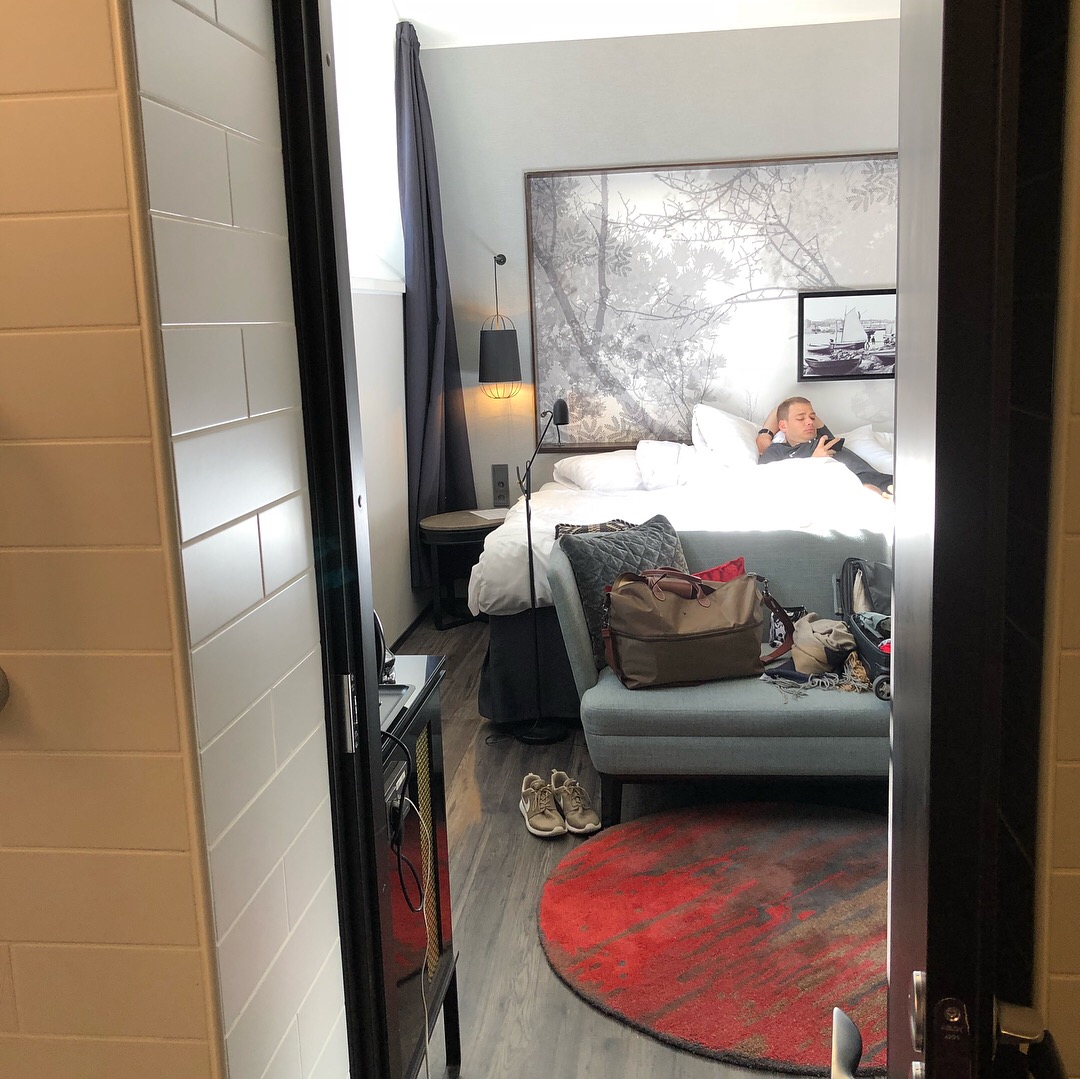 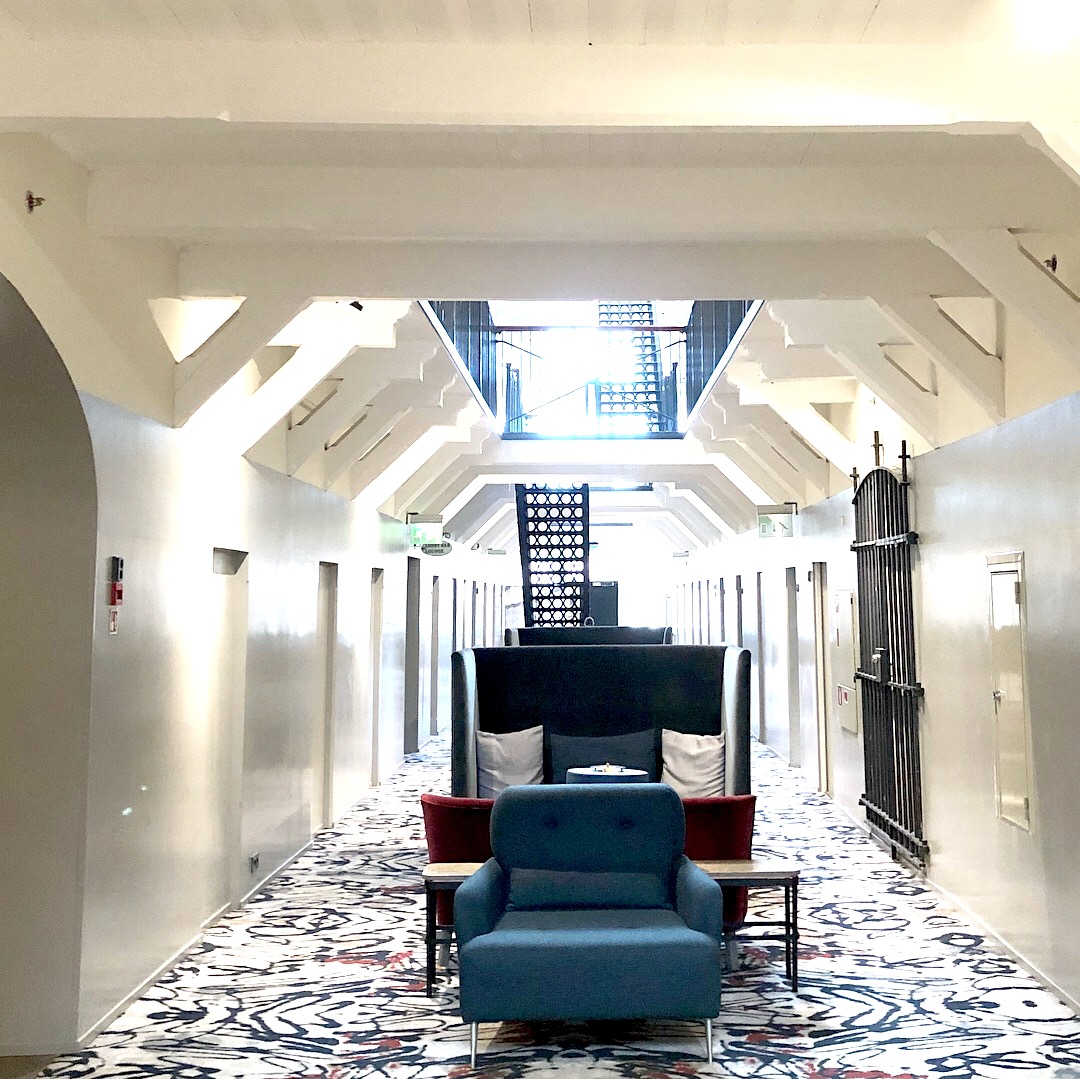 After settling into the room, we headed off to explore the town. The weather was awesome and we had noticed a cool waterside bar as we drove into the hotel, so we headed in that direction. It turned out to be cool little place with a rooftop bar called Neighbour bistro overlooking some outdoor swimming pools. It was an awesome summer evening hangout. People were in deckchairs sipping sundowners. We found a table. Rob had a couple of beers and I sipped on an Aperol spritz.
Whilst we were there, we jumped on TripAdvisor to find a place to eat. this was actually more difficult than expected as the majority of restaurants are not open in Helsinki on a Sunday night. But we did find one called Passio, which looked pricy but had great reviews, so we decided to give it a go as we only had okennight in the city, and called to book a table. As it turned out, we didn’t need a reservation as it wasn’t full. 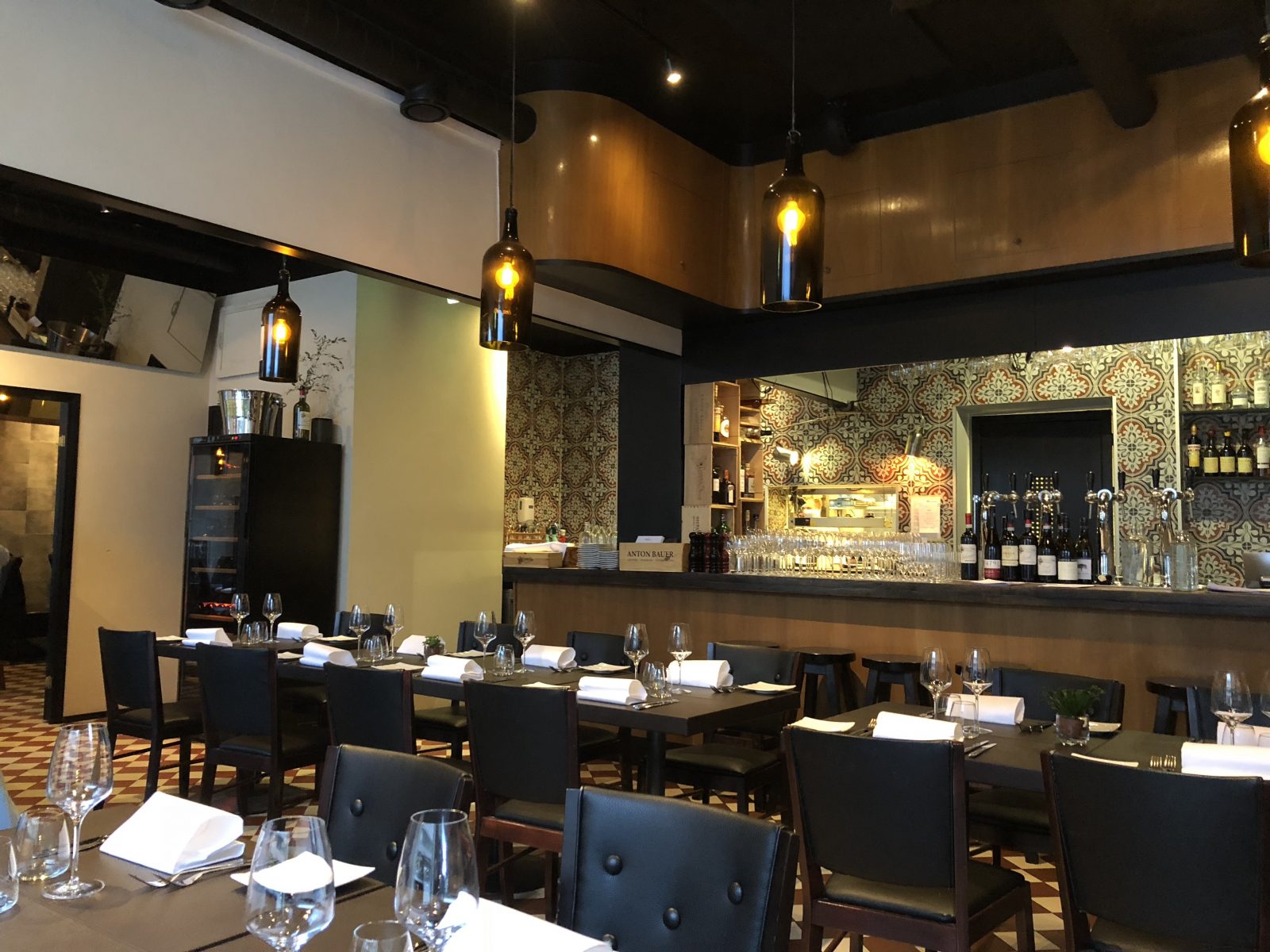 We had a choice of 3 or 5 courses author without wine matching, we opted for 5 as we were told to that they were just smaller versions of the 3 course menu so we went for it. We decided not go for the matches wine – because we didn’t fancy 5 glasses on top of the rest and didn’t really want white, so we opted for a bottle of Italian Pinot Noir and settled in for a gourmet extravaganza. 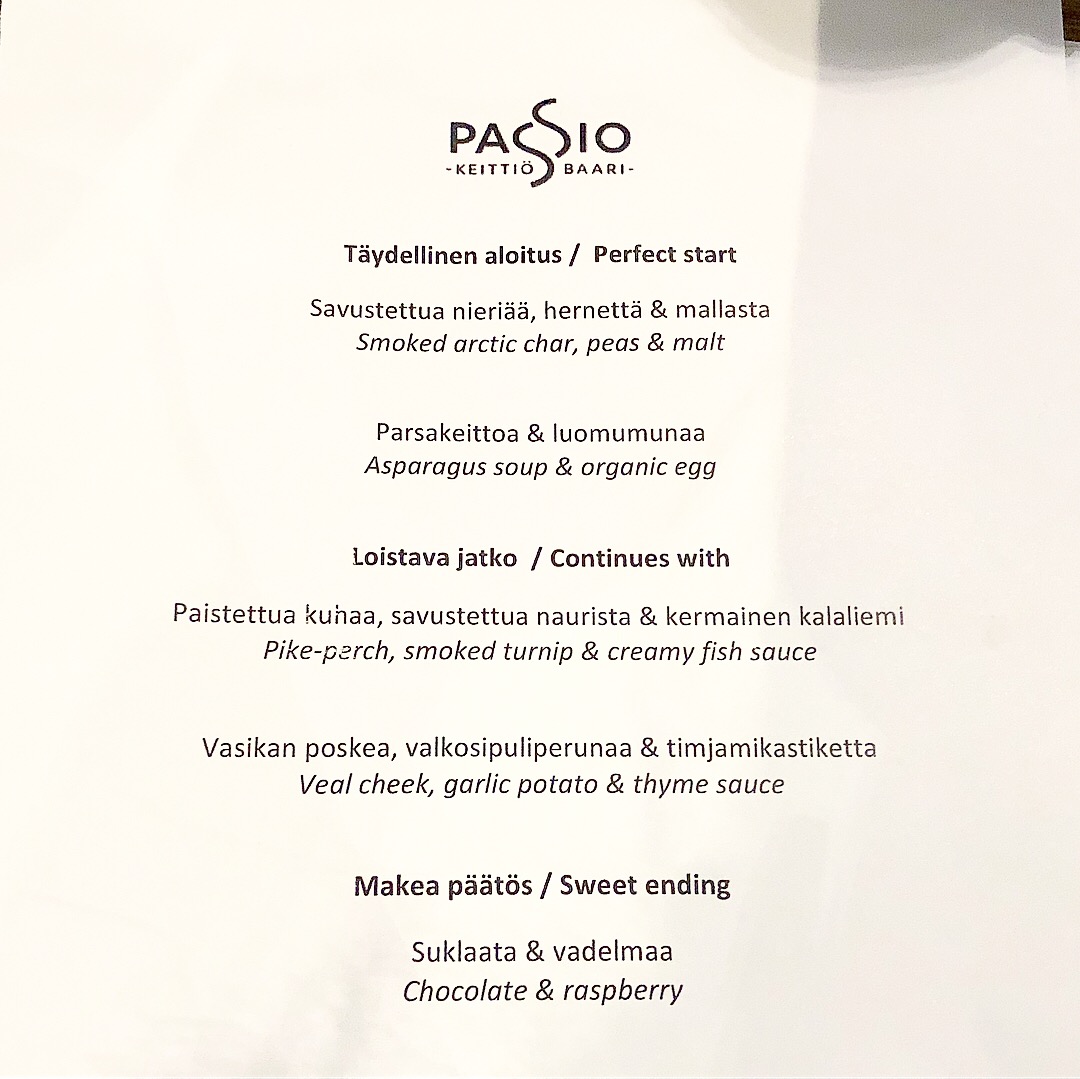 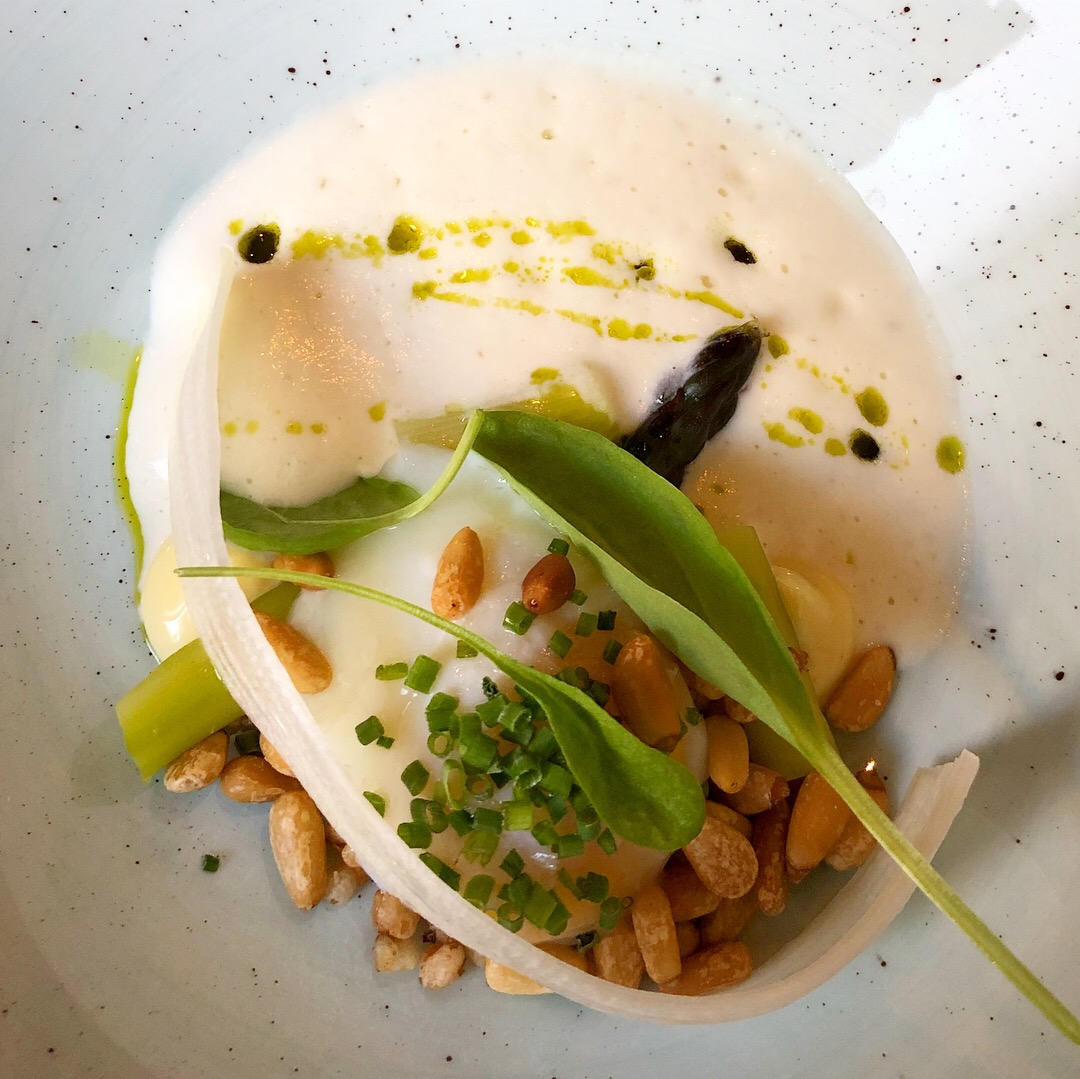 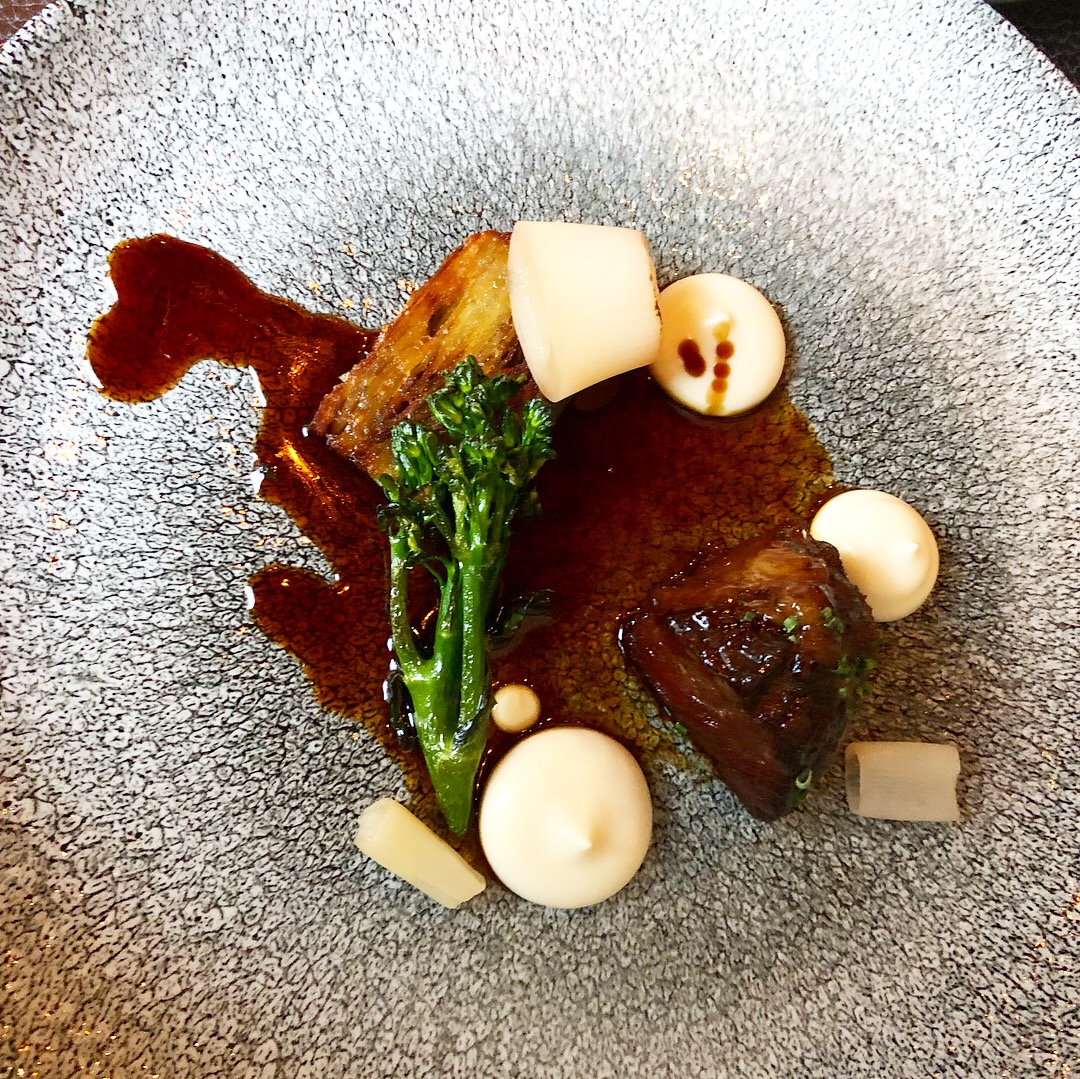 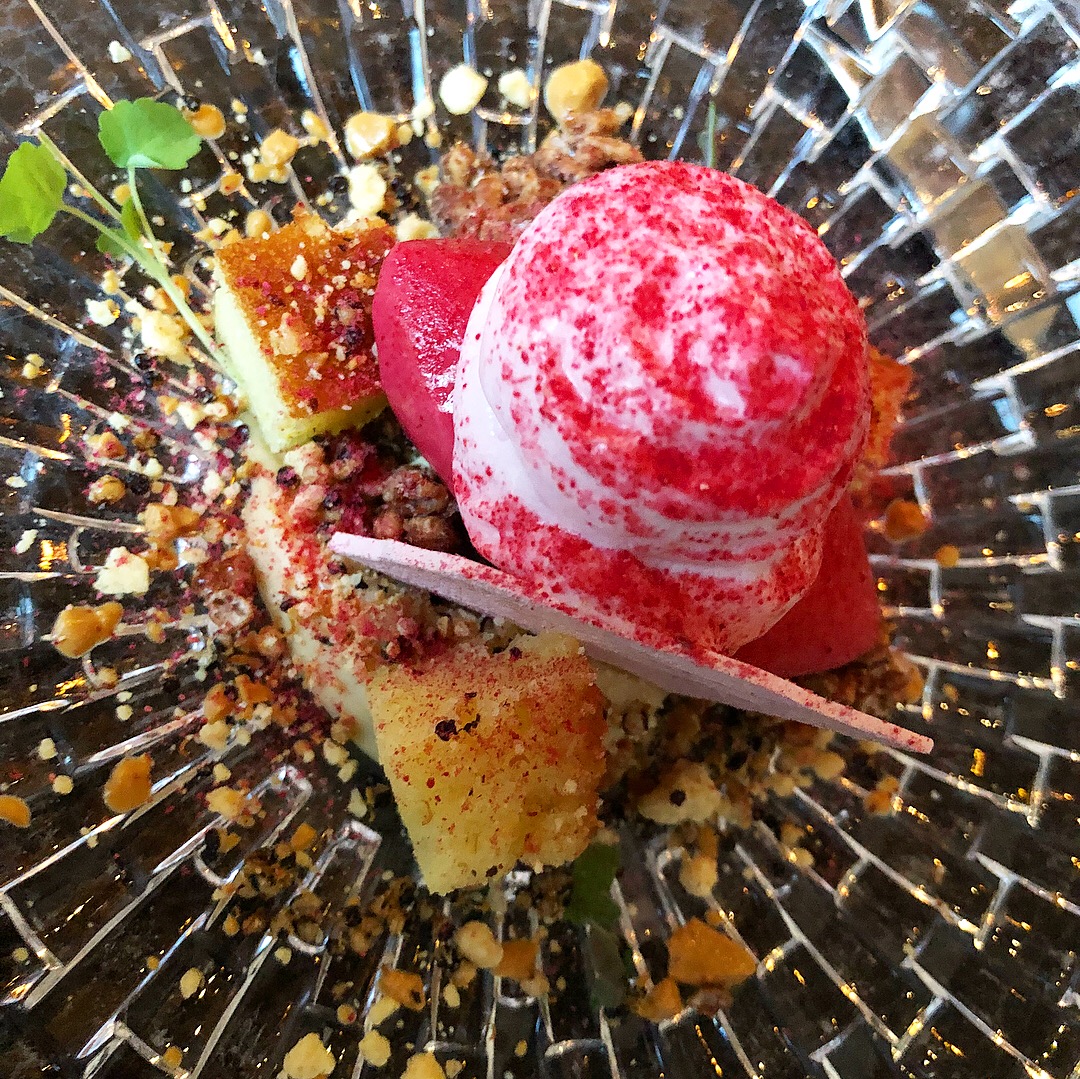 After dinner we walked home with the intention of popping to the hotel bar for a nightcap, but we went back to the room to drop our stuff and both fell asleep and woke up at 2am. I still had my makeup on and was so confused. But I guess I really needed it, having come off the back of a very busy few weeks at work capped off with The Guernsey Literary Festival and two hours sleep before my flight to London. I just got up, washed my face and went back to sleep. I totally forgot to set any kind of alarm and we both slept until about 8.30am local time (630am UK). There is one thing that I will say for this hotel – it is extremely quiet and peaceful and very cool. Most likely a symptom of its prison past and thick walls, it makes it a brilliant place for a great sleep.
After a quick shower, we headed down to the breakfast room in the basement of the hotel. Options were simple, with just the right amount of variety. Bread and pastries, cereals, juices and coffees and a fruit and vegetable section, not to mention hot food options including pancakes and bacon. 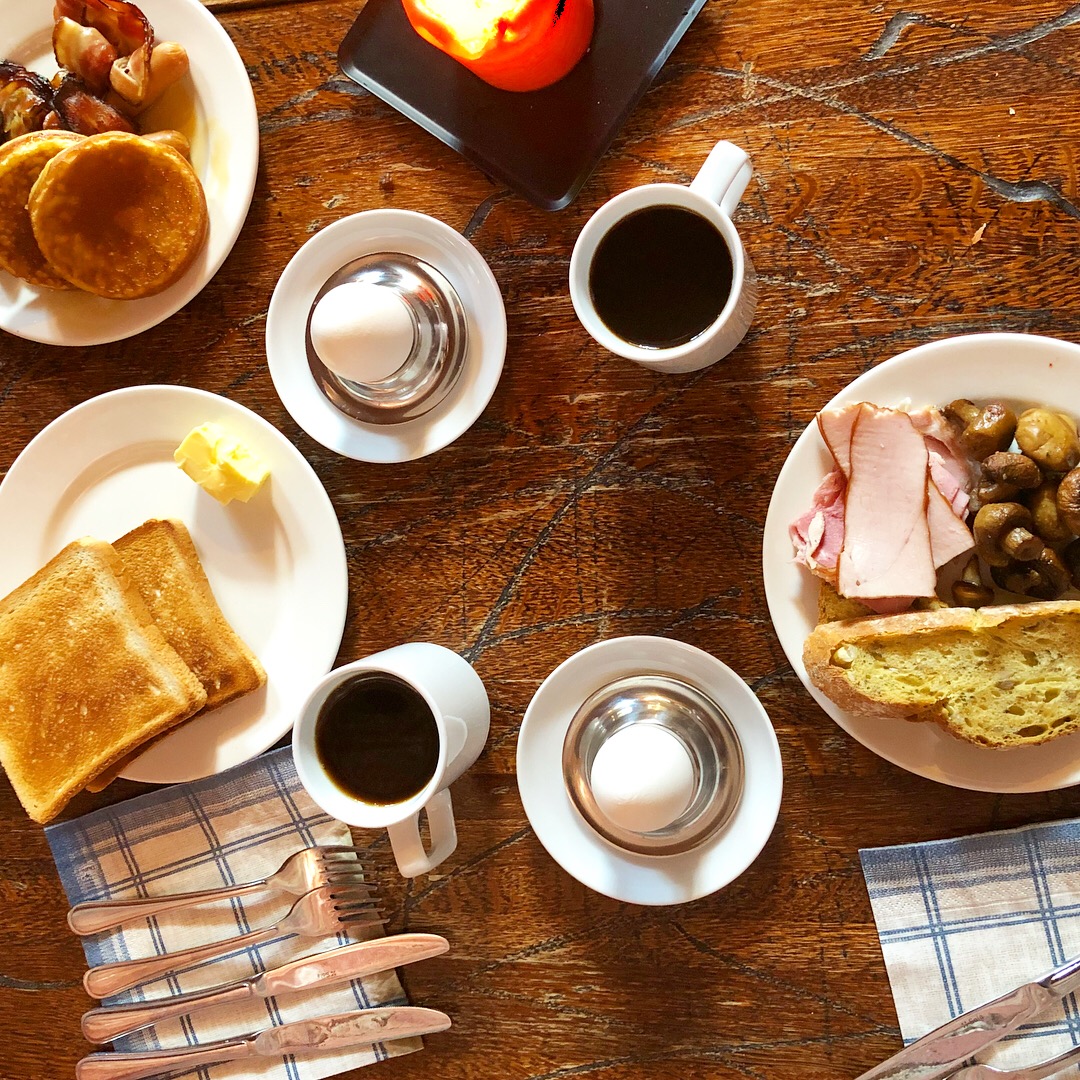 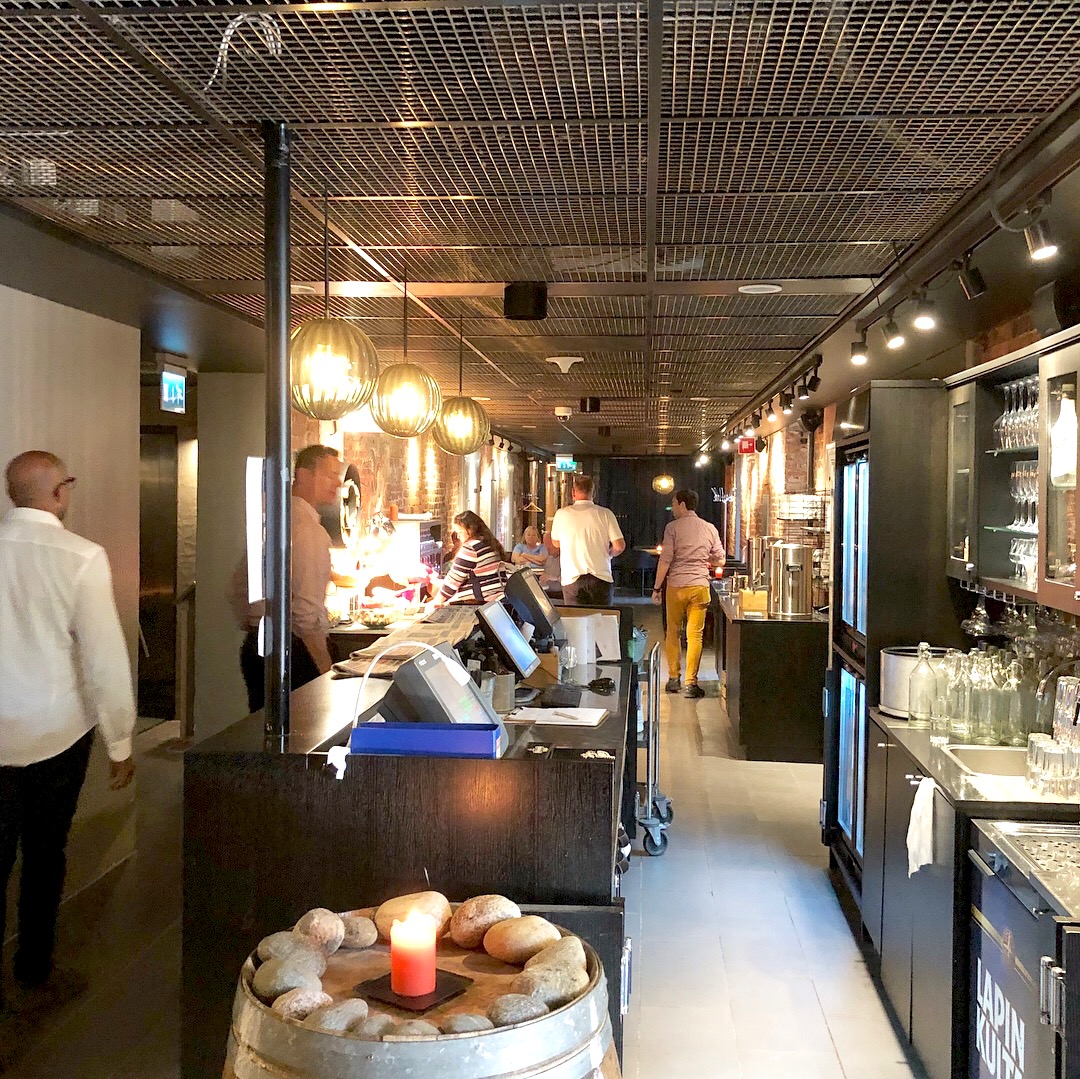 After breakfast, we headed back out for a walk and quite frankly, an H&M. We always need a quick shopping fix when we get off Guernsey so we picked up some holiday essentials before heading back to the hotel to pack up and head back to the airport.
I really enjoyed our 24hrs in Helsinki. Given that I may never go back again (although I’d actually love to see more!), I’m pleased to have been and put my phone down and had a great time with Rob in a city we didn’t know.
Total
0
Shares
Share 0
Tweet 0
Pin it 0