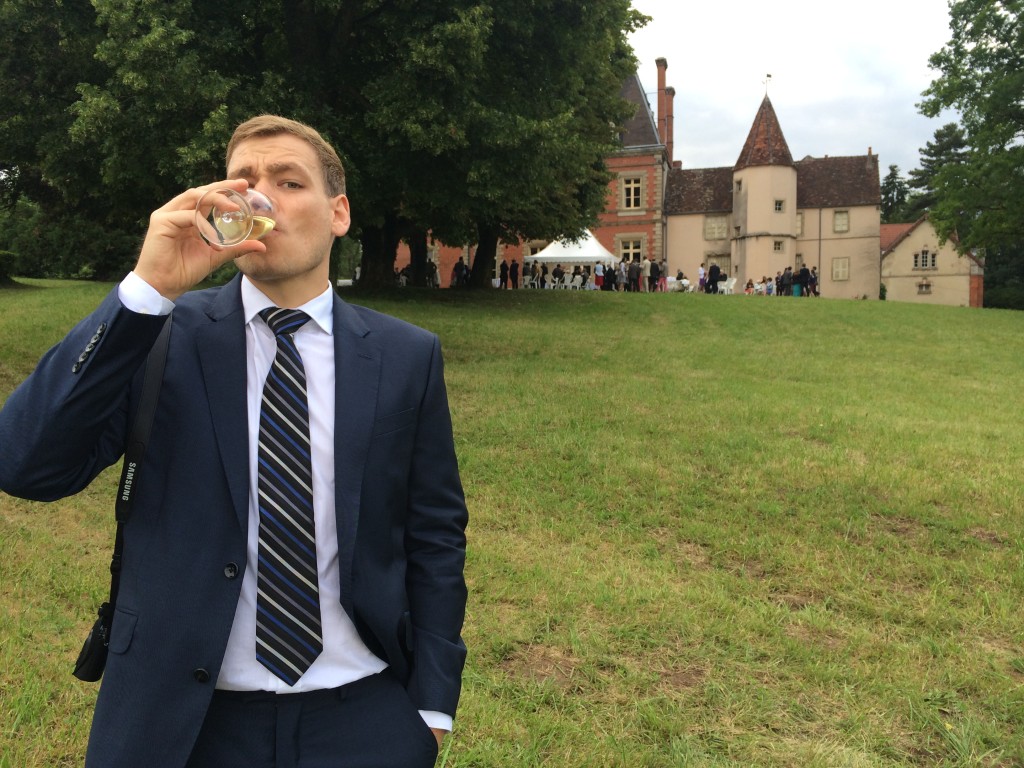 The other night, we were flicking through Netflix and happened upon a documentary entitled ‘A Year in Burgundy’ that followed the winemakers of Bourgogne for a full year in their vineyards. I’ve really developed an interest in winemaking and wine tasting over the past few years. We were lucky enough to visit Bourgogne and spend not a quite a year, but a weekend in Burgundy whilst at my friend’s wedding a couple of years ago. After watching the documentary, I realised that I never actually wrote about that trip. As is the case for a lot of my trips. Sometimes, life gets in the way and if I don’t write about it at the time, it becomes a blurred memory and difficult to write about. My travel memories are all amassed in a pile of photos, notes, business cards and receipts and I desperately want to get them all on this blog, not only for you to read, but also because I would love to have my travels documented beautifully. On this occasion, Netflix have jogged my memory and I’m grateful to them for that. 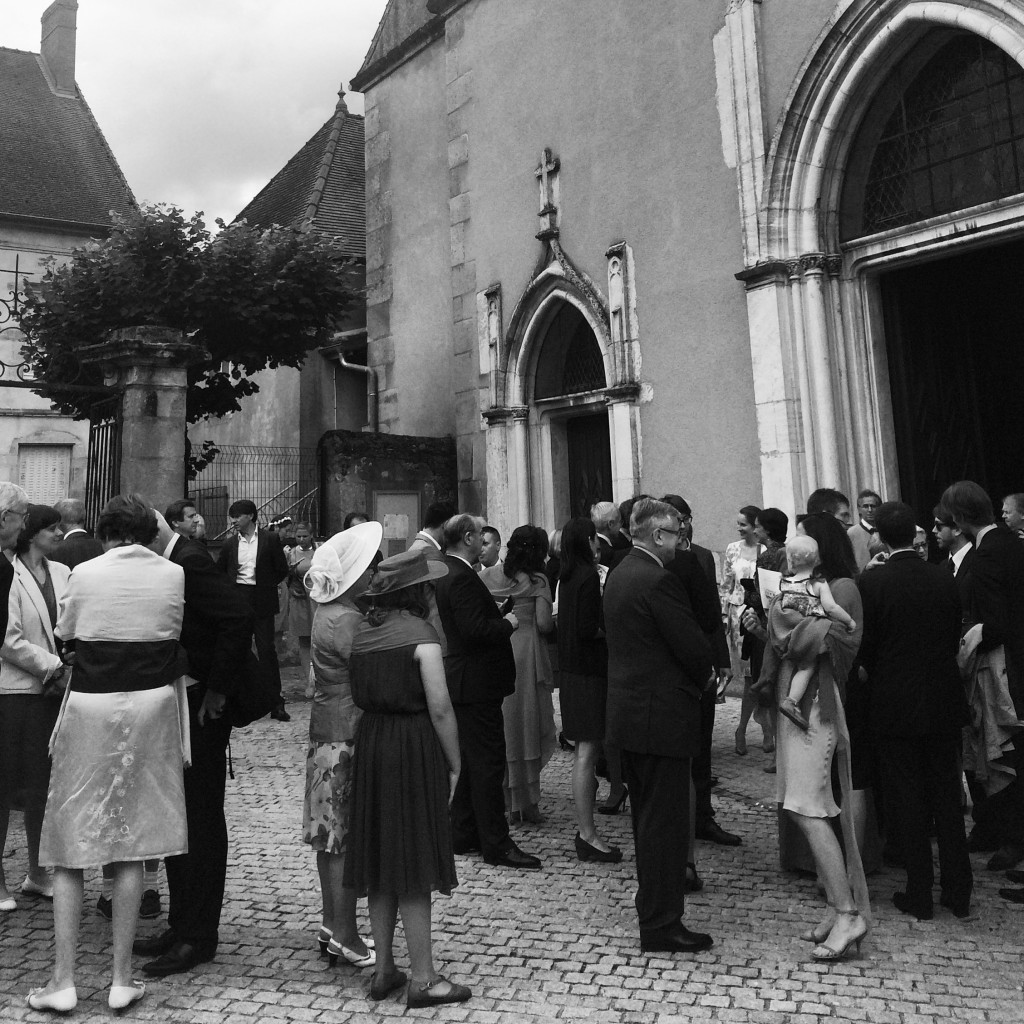 When I lived and studied in Santiago de Compostela, Spain, my flatmate was a lovely Parisian girl. Over wine, we used to talk about how one day she would marry in her grandfather’s chateau in the French countryside. Fast forward to a few years later and I got a message saying that it was happening and I needed to book tickets. We had met a couple of times over the years whenever I was in Paris, and I thought it would be a stunning idea to go and check out this chateau she spoke of, watch her get married and get a holiday in with Rob at the same time. I love exploring Europe with him. As a South African, he sees things differently to me and I love explaining the culture, history & language to him. He always repays the favour whenever we are in Africa. 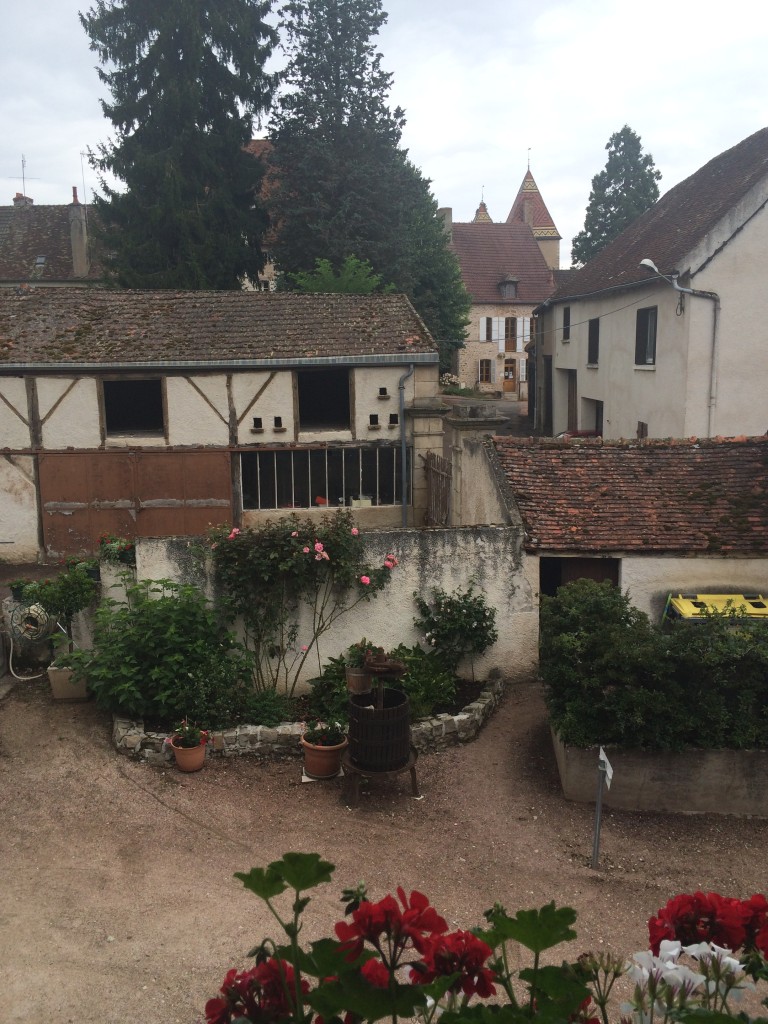 Rob and I flew to Lyon, hired a car and drove north to a place called Couches (pron. coosh) in Burgundy surrounded by fields of pasture, agriculture and of course, vineyards. We stayed in a small hotel – the only one in the area it seemed: Les Trois Maures. It was simple but central, had good parking, wifi and was fine for what we needed. For lunch, we ran to the boulangerie for a baguette and found a boucherie for some ham, before grabbing some cheese from the supermarket and having a little picnic in the square. It was a tiny town, really French and welcoming. Every now and then a farmer would drive past in a tractor or a vintage Peugeot that would make us smile. On the Friday night, we ate in the most spectacular restaurant just around the corner from the hotel:La Tour Bajole, Couches. I can’t even begin to tell you how good the food was, so authentic and ridiculously good value for money. It was absolutely insane to me that we could be ordering a gourmet 5 course tasting menu in the middle of France for 35euros, but we did and it was more than delicious. We started with a selection of homemade amuse-bouches, followed by fabulous starters before coq au vin and boeuf bourguignon (of course!) with dauphinoise potatoes. Dessert involved a chocolate souffle and creme brûlée. Then came the cheese and it was on a trolley – a bit of a throwback but impressive nonetheless. After the cheese came the coffee with more homemade treats (enough patisserie to have skipped the previous two courses). The wine was local and superb. We practically rolled home at the end of the night. 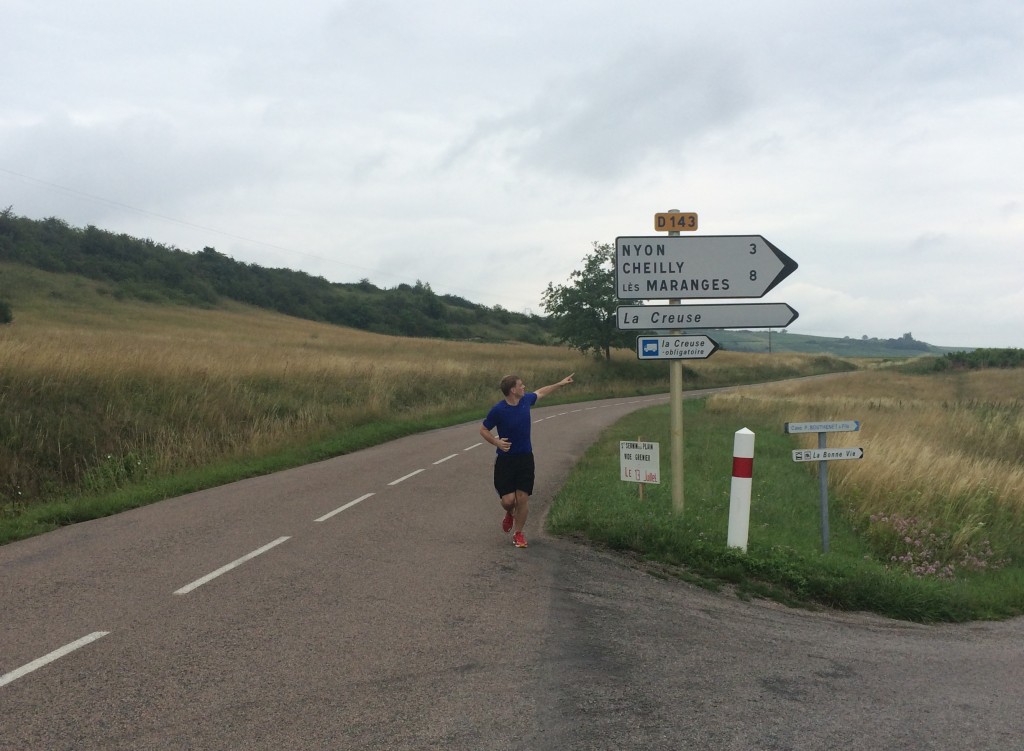 The next morning, we awoke relatively early and headed out for a run and to check out the local area. Rob was in the early stages of training for his first marathon and I had signed up for my first half, so we often ran every Saturday together, wherever we were. After our run, we headed back to get ready for the wedding. It was in the local church up the road, so we gathered outside with other guests until we were welcomed in by the vicar. My friend arrived and looked stunning. It was the first time I had seen her for a couple of years – and a marvellous way to do it too. The ceremony was catholic and quite long- considering the entire thing was in French and Rob doesn’t speak a word, but it was a great experience and so lovely to watch. 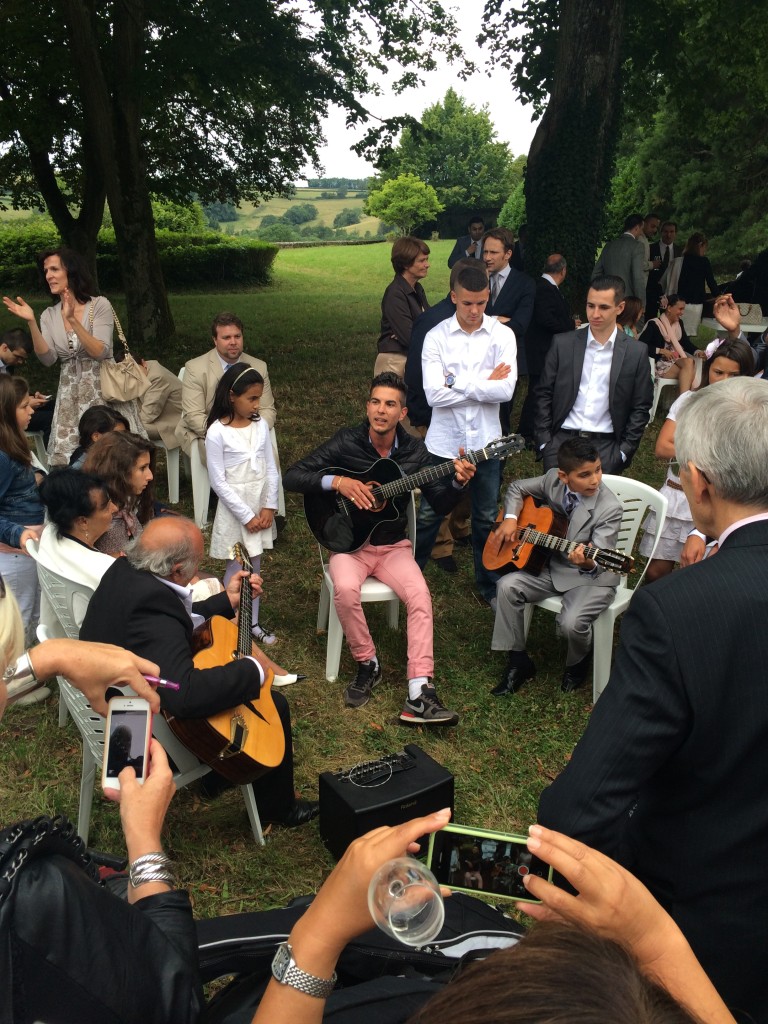 Afterwards, I finally got to see the little chateau that she had been talking about for years. What I hadn’t realised was that it was in actual fact the huge home sitting majestically above the town surrounded by its own vines. It was fantastic.
After a long walk up, we were welcomed at a drinks reception overlooking the valleys and the vineyards and offered the chateau’s own wine and a variety of fabulous canapés – catered by non other than the wonderful hostess of the restaurant the evening before! The wedding meal and subsequent party was fantastic (especially the acoustic bambaleo that broke out during the welcome drinks!). 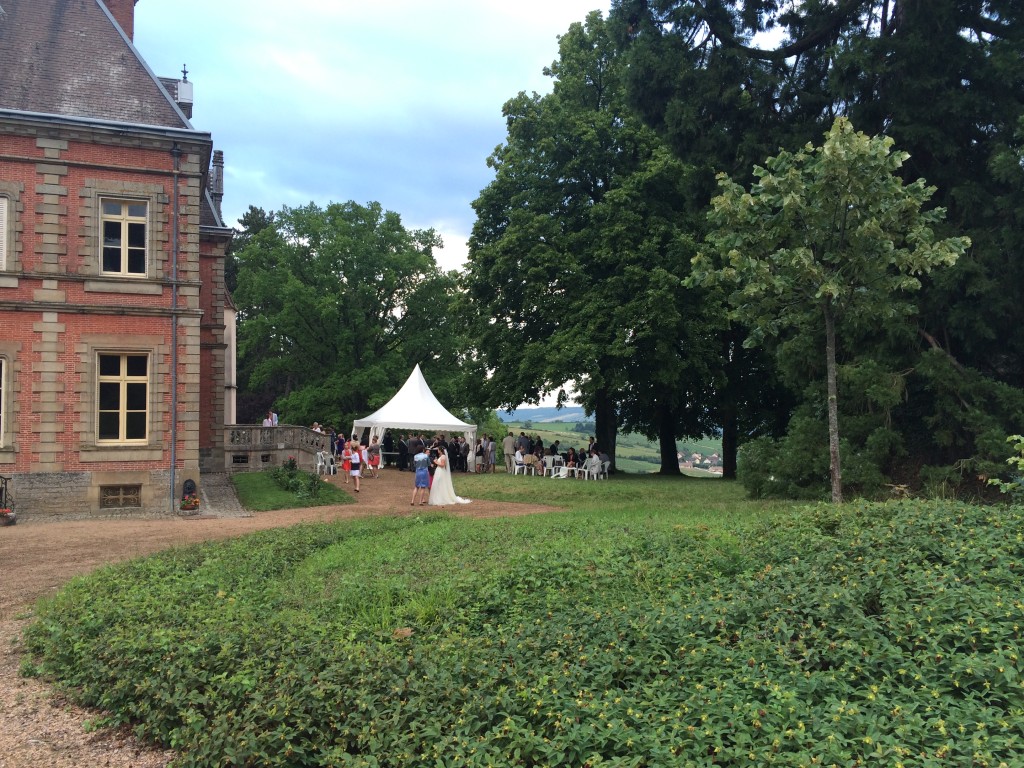 There’s something very special about drinking wine in the place where it is made. And having now seen ‘A Year in Burgundy‘, I appreciate the region’s traditions so much more than I even did at the time. I hope they continue to succeed to years to come.
Where we stayed: Le Trois Maures, Couches
Where we ate: La Tour Bajole, Couches
Have you ever spent a weekend in Burgundy?
Total
0
Shares
Share 0
Tweet 0
Pin it 0